The efficacy of Facebook fundraising tools for nonprofit crowdfunding remains a controversial topic in nonprofit circles.

Can the world’s biggest social network really be leveraged to raise significant amounts of money for causes, especially smaller organizations?

All evidence points to a resounding yes. (Yes, with some caveats. Read on.)

Facebook has created a suite of useful tools for nonprofits to collect tax-deductible donations on the site, through the two-tap Donate button on Page posts, ads, Cover images, and Facebook live streams.

If your nonprofit is registered with Facebook Payments, your supporters can give to you in just 2 taps – an incredibly seamless and easy way to donate without leaving Facebook.

Facebook Fundraisers empower individual Facebook users to choose a cause to support and solicit donations from their personal networks of friends, family, and colleagues.

Facebook Fundraisers look a lot like a GoFundMe or Kickstarter page, with the personal story of the person raising money front and center, a progress bar showing how much has been raised towards the goal, a list of donors, and the ability to provide updates on the campaign to those interested.

Anyone on Facebook can start raising money for just about anything they care about, in just a few seconds.

Join me for a LIVE webinar on this topic: How to Use Facebook’s Free Fundraising Tools to Drive Donations – and get your questions answered!

Based on the popularity and ubiquity of personal Facebook Fundraisers (and perhaps in response to a slew of bad press?) Facebook wants to bring the conversation back to how they are doing good in the world.

If you have logged in recently, you’ve seen the ways that Facebook is pushing its users to start Fundraisers of their own, or to donate to Fundraisers started by their friends: 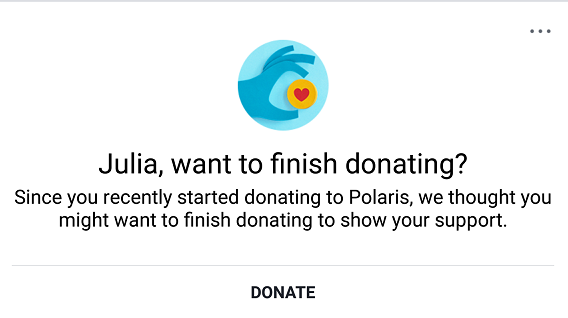 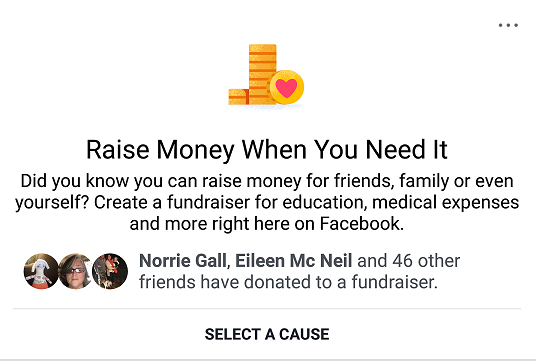 In this vein, Facebook just announced 3 new features that are sure to make Facebook Fundraisers more appealing and accessible to the masses.

Individuals can now pledge to match donations made to their Facebook Fundraiser in the amount that they choose, from $5 to $2,500.

Data has shown that offering a matching pledge increases donations.

This matching pledge feature is now available in the U.S., with plans to roll out internationally. Facebook has added more categories for personal causes, ostensibly to compete with GoFundMe and others in the online crowdfunding space. The biggest news is that, in the coming weeks, Facebook will be eliminating the platform fee on all personal Facebook Fundraisers. This is huge news for crowdfunding and peer-to-peer.

After #GivingTuesday 2017, Facebook got rid of all fees associated with donations made to nonprofits on the platform via Facebook Payments.

But, despite widespread criticism, fees were (and, for the moment, still are) still collected on individual, personal Facebook Fundraiser campaigns.

For example, on their website, Facebook says, “For donations made to personal cause fundraisers in the United States, 6.9% + $.30 of the donation goes to payment processing fees, fundraiser vetting and fraud prevention.”

In their most recent announcement they said that these fees will be going away entirely, but that there “will still be a small fee charged for payment processing and applicable taxes.”

The elimination of fees could provide to be a true game-changer, considering many standard crowdfunding platforms take fees of 5-7%. What Does This Mean For Nonprofits?

It’s hard to tell since this is in the early stages, but the ubiquity and popularity of Facebook Fundraisers and Facebook Payments for nonprofits is hard to deny. The implications of Facebook fundraising tools and nonprofit crowdfunding were discussed in my recent session for 18NTC, the Nonprofit Technology Conference, held in New Orleans this April.

Joining me to share insights from the nonprofit social media trenches were Joe Gallant from Polaris and Jennifer Cheang from Mental Health America, both of whom have had serious success using Facebook Fundraisers to drive donations and engagement for their organizations.

Our session was smack in the middle of Mark Zuckerberg’s two days of Congressional testimony, but that did not prevent the room from being filled with nonprofits eager to learn more about how to raise money on the world’s biggest social network.

I started out with a brief overview of the 5 main tools that Facebook provides nonprofits to receive donations:

To see if you qualify, and to register your nonprofit to use these tools, go to: https://www.facebook.com/donate/signup

The number one concern raised in the session revolved around Facebook not sharing much, if any, donor contact information with the nonprofit receiving the donation.

Often, nonprofits only receive the first and last name, let alone contact information like their email. Reporting can also be slow and complicated.

The nonprofits can cross reference these reports with their database, but since most donations on Facebook come from peer-to-peer campaigns, these donors may be completely new to the organization.

This lack of donor information received and the inability to cultivate these new donors is certainly a huge issue and one that has been debated heavily, and one that I have written about extensively.

Joe and Jennifer had some on-the-ground advice for social media managers looking to continue to build relationships with donors via Facebook:

In my experience and in my observation, this concern around Facebook fundraising tools and the lack of donor information is largely generational.

Younger fundraisers and social media managers (like Joe and Jennifer) are not as bothered by the lack of donor acquisition potential.

They see Facebook Fundraising as a way to create deeper connections with their donor rock stars – those people who run fundraisers for them, by soliciting their personal networks, friends, and family.

Your nonprofit needs to determine if you want to add this powerful tool to your online fundraising toolbox.

Join me for a LIVE webinar on this topic: How to Use Facebook’s Free Fundraising Tools to Drive Donations – and get your questions answered!